The bright future of publishing. Despite Amazon

The publishing world very frequently complains about its condition, often feeling secure in its eternal status as the "weak link in the system". He complains about Amazon, e-commerce, big chains and more. Then, often, doing absolutely nothing and continuing to get by in a world that has changed and continues to evolve. This is a story that we hear too often and that does not belong to us, convinced as we are that if the world around you changes, staying firm on your beliefs is the best way not to contribute to improving it in any way. And if it is true that by selling publishing we somehow want to change the world for the better, knowing how to evolve is a daily necessity.

And in this regard we write this post because there is a story that struck us a lot. A business story (well, yes) that is worth telling you to understand how much the publishing world has reached senseless, dull and out of control excesses that are leading to ruin the very giants that fed them. AND a story that has nothing to do with independent bookstores, or with independence in general, because we are talking about business and billions of dollars. However, it is worth telling it because it is by observing the world outside what we often have the honor of defining a "niche" that we build the foundations so that the publishing industry we try to build every day can become an increasingly widespread, alive, sustainable, to spread culture. It is also the way to finally get out of the same old idea of a "niche" for a few educated people or philosophers of paper regardless and finally become a solid system of cultural diffusion that accepts plurality.

The story begins December 5, 2020 with a front page book seller in the Wall Street Journal. Yes, you got it right, a front page book seller of the leading financial newspaper in the United States of America in 2020. This seller, of course, bills some $ 3.5 billion a year, is called Barnes & Noble and is the largest bookstore chain in the US with over 640 stores and a robust distribution system.

The news to be given, as often happens in the months of the second COVID wave, is that of a dramatic crisis in physical stores, in this case bookstores, which for Barnes & Noble together with distribution are the main sources of income.
In recent months many of his bookstores have seen turnover decreases by up to 50% and a very profound crisis emerged in 2020, capable of wiping out a large part of the company.

Jeffrey A. Trachtenberg, a journalist who signs the article that tells this story, has been writing for the Wall Street Journal since 1989 and one of his sectors is the publishing industry.
And for someone who understands it, the best way to narrate this dramatic situation is to talk about numbers but also about real life. And then along with financial issues describe the somewhat absurd stories of John Redford, manager of the Barnes & Noble store in Idaho Fall, Idaho. The store manager, now exempt from his function as a bookshop, tells how he has had no control over the management of books in his shop in recent years: some Director from the New York offices takes care of it.
Mr. Redford is forced to keep dozens of books by James Patterson and John Grisham on his table even if they are of little interest to his readers and often has to return almost all of them after a few months. The average return of Barnes & Noble? Between 25 and 50% of the titles that pass through its bookstores return to the publisher because they are unsold. 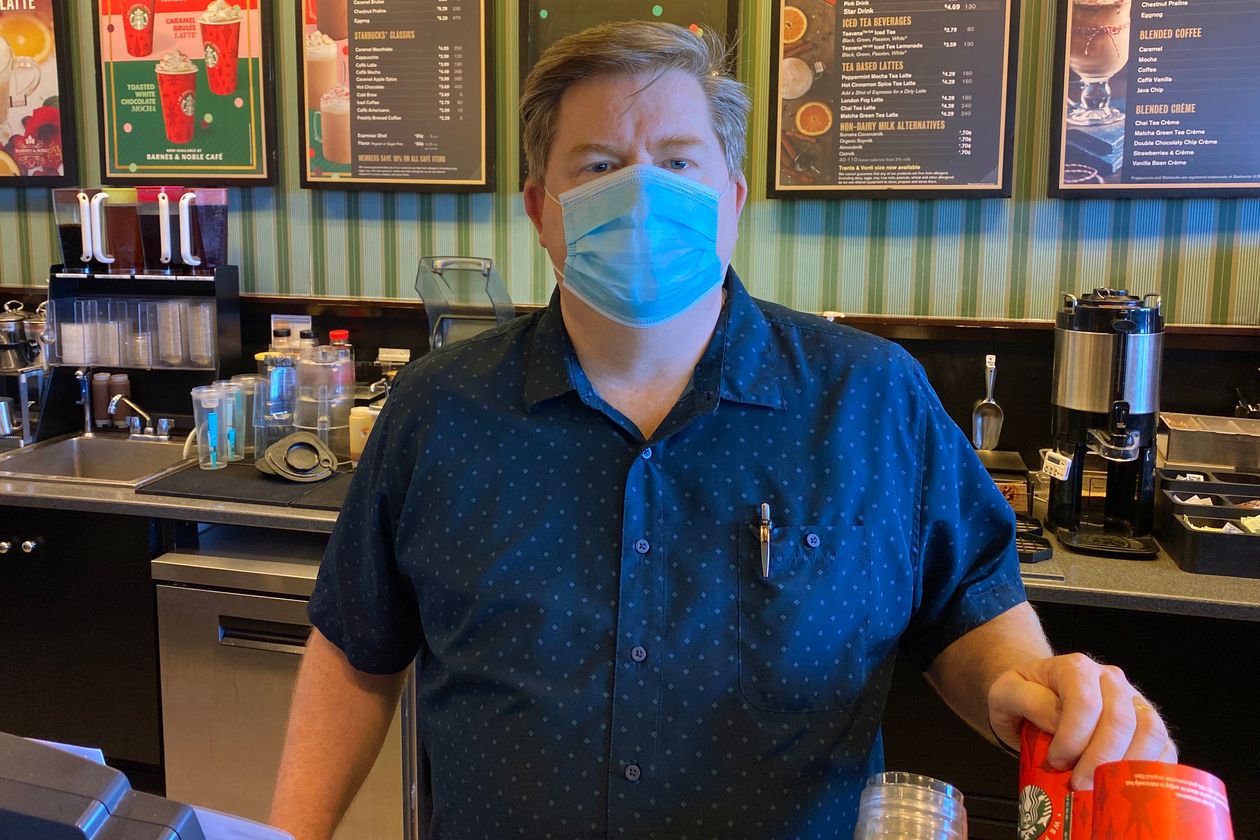 The story of Barnes & Noble continues by telling how the top managers are in charge of everything, making general agreements with publishers who, in order to sell their books, are willing to pay extra contributions to see them put in the foreground in the store.
And then the small Idaho Fall bookstore finds itself exhibiting the books not according to what customers would ask for and perhaps would make more money, but according to an upstream agreement with the supplier. This makes massive libraries standardized showcases of books often unsaleable.
The other cornerstone of Barnes & Noble in the relationship with publishers is the search for the maximum "economy of scale", which to make each copy cost less for production (because if you don't sell the cost becomes a loss) it creates books that are all the same , monotonous, very similar objects that often do not do justice to the content. The economy of scale appeals to managers, but considerably flattens the appeal of the book as an object.

Finally, in this absurd story of the Redford bookshop, there is also talk of the collaborators of the bookshop. Always the big New York offices for years have sent hordes of young "bookshelves" intended as people who had no specific interest or knowledge of books, of display methods and passion for that work. They simply put in place without demanding too high salaries. And this low-cost, unskilled labor was enough to convince a manager to hire. Mr. Redford from Idaho Fall was clamoring for less personal and passionate about reading and paper, rather than so many who arrange the shelves to get their paycheck at the end of the month. The result of having fewer staff able to recommend books? Sell less.

This reconstruction of a normal book life of the big chain that we found in Trachtenberg's article tells the evidence of what happens in many chain or independent bookstores that have decided to rely on big publishers, and who complain that "because of someone" they lose sales and are forced to close.

The turning point in this story comes at the end of 2019, the Wall Street Journal tells us, when James Daunt arrives to direct Barnes & Noble, who has to face the nightmare turnover of 2020 while having all the inefficiencies of the system under his eyes. illustrated. And his plan from the end of 2020 is a great anti-system action carried out by the very system of large publishing.

In a recent meeting between publishers Daunt states: "We have no divine right to exist as book sellers", finally ruling that the book itself is not a simulacrum, "How do booksellers justify themselves in the Amazon era? Only by creating places of joy, pleasure and serenity ”impossible to recreate online in the cold chaos of that department store that is Amazon.
Daunt says something that, even on the side of those who wear the label of a great manager, we believe is valid for many who do publishing: books and print media in general should not be saved at all costs. There is no written right to their existence, because it itself is sometimes ugly, inconsistent, has no precise purpose or economic or cultural usefulness.

The publishing system that we have inherited for several decades works like this: it is absurdly based on the principle of surrender. The publisher, the first pillar of the system, needs to sell a book to prove to the company or shareholders that they have the numbers. And then the distribution floods the libraries with low-priced printed titles "with right of return", or with the possibility of returning them to the publisher if unsold. Often he sends them regardless, without any logic, contextualization or selection. And since disposing of books costs money, the price to pay are very low margins for the bookstore, often below the limit of economic sustainability.

A useful system for small experiments, which however, given the precarious financial situations of bookstores, often concerns 80-90% of the titles present. And soon the library turns into a pout pourri of everything, but with the great physical limit of space that nothing can do against the vast and indistinct Amazon catalog.

Since the beginning of 2020 and with the emergency still underway, it tries, in an attempt to save a billionaire giant (outcome still not obvious), to launch a series of significant actions that want to change the skin of the company itself and are guided by 5 key principles:

What do we learn from this story apparently so distant from us? That the publishing of the future is independent, it is made up of specialization and quality, of many universes that manage to coexist because they specialize in their own little world. Who certainly do not need to "resist" Amazon, because the latter covers the most standardized segment of the market with high volumes, but there are as many quality masterpieces, lower runs able to respond to a growing need for words, beauty and culture off the web.

From this lesson written in financial language we read between the lines that the greatest in the world to save themselves are trying to apply to their companies those concepts that, more or less consciously, today determine the success of a few independent bookstores that despite everything go well, they grow and broaden their horizons. We don't know how it will end, but if the giants are moving in this direction the road is tough, but a new era for publishing has already begun. And if physical and online sales channels now have total permeability, just apply the same concepts to your site, to your selection of online customers and the future of paper will be much brighter than Amazon could ever have imagined.

The article by Jefrey A. Trachtenberg in the Wall Street Journal is available at the link https://www.wsj.com/articles/barnes-nobles-new-boss-tries-to-save-the-chainand-traditional-bookselling-11607144485)

Thomas Buckley and Scott Deveau's Bloomberg article can be found at https://www.bloomberg.com/news/features/2020-03-04/barnes-noble-wants-to-be-more-like-an-indie-bookseller